A picture book featuring plant, fruit and vegetables that exhibit characteristics associated with their features. For example, peppers are sassy and hot tempered, a cucumber is cool and collected. The characters interact with one another in short vignettes, descriptions are given of their temperaments and so on. Rhyming text,poems tell short stories.

Anthropomophized objects, animals, and plants are common and frequently used storytelling devices and characters in popular modern picture books, such as Pete the Cat and the Nut Family series, by Eric Litwin. Timothy Young (a curator,writer , editor and writer for the Yale Review) asserts in “Grandad Coco Nut and the Golfball Kids” that their heyday began in the early twentieth century. Between 1910 and 1940 books for juveniles like this one by Gordon and others featuring “talking trees, golf balls, pianos, candies, and other unlikely characters were unleashed in the fast-growing genre of juvenile books.”This title by Gordon is a sequel to her works “Flower Children” and “Bird Children” and was followed by many other titles featuring butterfly baby characters, and flower children. According to Young, “objects lacking both motion and appetite (using the ordering principles of The Great Chain of Being) flourished as characters in storybooks.”

Better not say such things at all.“

Racist Associations/Negative Depictions of Non-White Characters, Non-Anglo Saxon figures. As Young notes, the philosophical concept of the “chain of being” orders the logic of the narratives of this era. This foundation of thought explains the racist thinking of the time that is taken for granted in the text. Racial and gendered hierarchies are implicit. In the medieval era, humans ranked in the middle, beneath God and above animals. During the Enlightenment, humans were placed at the pinnacle of being, with white Europeans at the top, and all other “races” ranked beneath in a particular order. Philosopher Francois Bernier (1625-1688) divided humanity into physical “types”. Linnaeus classified people as well, and explicitly assigned behavior and morals to the “races”.   In “Race, Racism, and Science: Social Impact and Interactions”,  John P. Jackson and Nadine M. Weidman discuss the origins and impact of scientific racism. The depictions of vegetables and fruit frolicking in Gordon and Ross’ 1914 reflect this racist  ideology.

Elizabeth Gordon lived between 1866-1922. I was unable to uncover an biographical details about her life. Information on her other works can be found here.

M.T. Ross was successful illustrator and comic creator. He worked as a set designer for RKO studios and with Walt Disney. He co-created the Buster Brown series.

According the International League of Antiquarian Booksellers, Volland publishing, based in Illinois, thrived from the early twentieth century until the stock market crash of 1929, but struggled during the Great Depression, which impacted the previous high quality books produced for adults and children. The publishing house found its greatest success with the Raggedy Ann books, written by Johnny Gruelle. In addition to books, they published  greeting cards, valentines and calendars. Their products are noteworthy for their high quality materials and the art deco style of illustration, which “featured clean lines and shapes”. 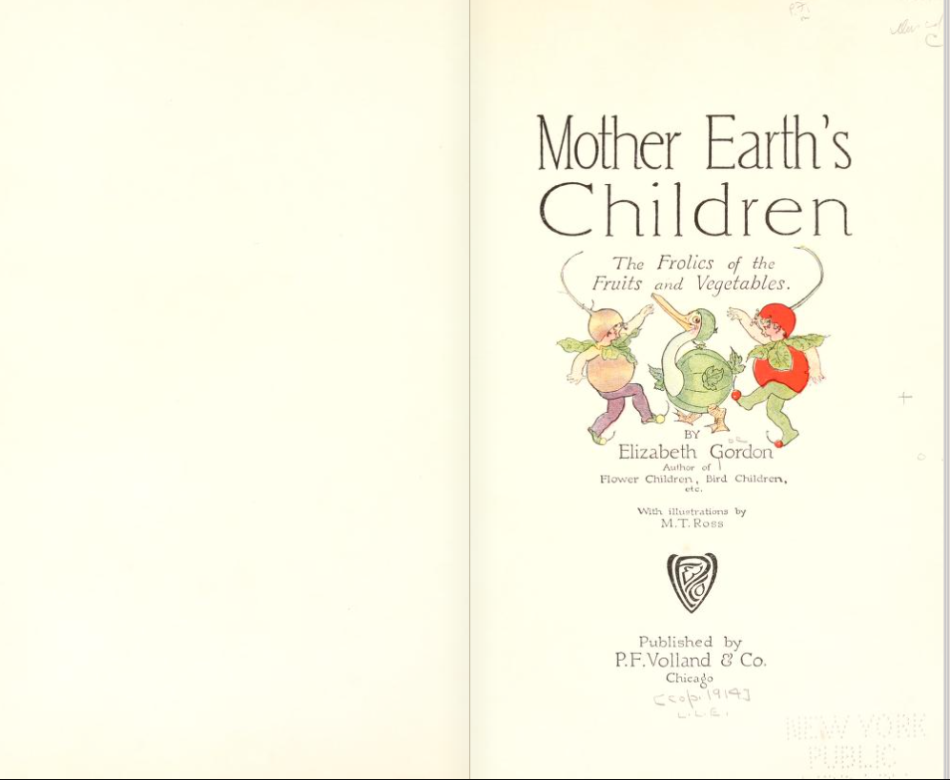